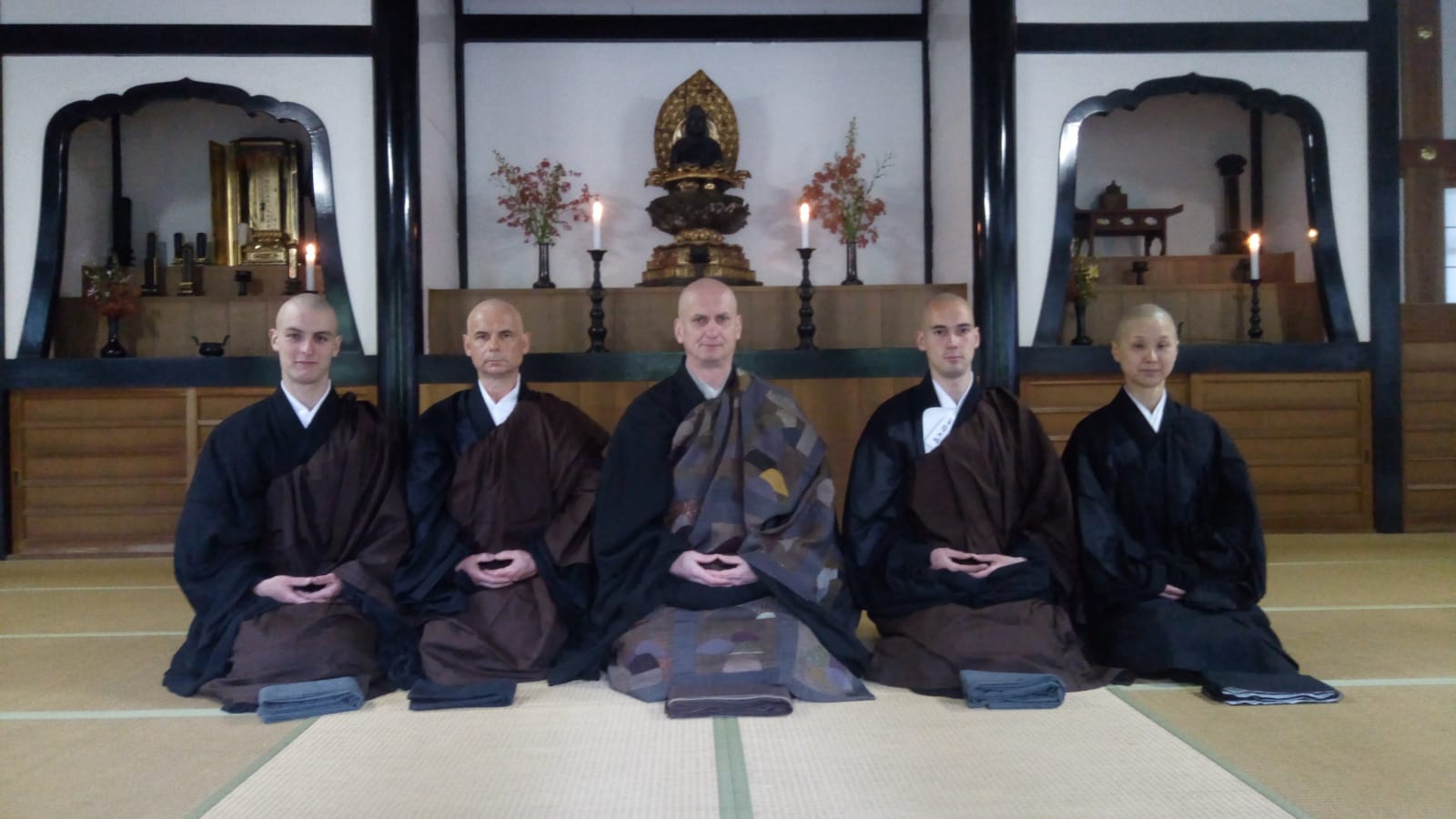 “By the end of this year, Antaiji needs a person to take over my position, otherwise I have to close Antaiji unfortunately ”. I remember Dojo-san’s words quite well, during the first tea meeting after the one-month winter break. The few practitioners who have decided to stay over winter to study this year’s: “To you; by Kodo Sawaki” were shocked. Antaiji might only exist until the end of this year?! What am I gonna do next year, where shall I go?! I am not ready yet?! A thousand thoughts rushed through my mind, I felt like someone is pulling the carpet under my feet away. For a long time, I have been wandering and searching, until I finally found Antaiji. And before it really started, it was meant to be over, well so I thought at least. I expected a lot of things to happen for this year, but not this. Already towards the end of 2018, Dojo-san spoke about taking a year off from Antaiji, he would not participate in the daily schedule apart from the tea meetings held every evening after dinner. But somehow, now during the winter month off, things must have changed drastically. By the end of winter, he and his family were moved out of Antaiji, to Osaka. Due to that, he would only visit Antaiji around once a month, making it impossible for him to be the abbot of Antaiji for much longer. With this news, I spend the winter more or less worried about the year after this one, 2020. I wanted to continue practising Buddhism, I didn’t feel anywhere near being ready to go back to Germany – no, not even going to another temple. I liked Antaiji, the tenzo task, the outside work, the long hours of sitting, the clearly structured schedule. And all in connection with Buddhism; Zen. What others might call hell, I started to call my home during my first year, 2018. I felt like everything somehow matched at this place, and deep down inside I hoped to practise here for a long time. Now looking back, the second year also having passed, I realize my premature motivation was about to pass, and I experienced the last drops of it during the first winter. For some practitioners, who come to Antaiji, this lasts only for a few months, although in my case, it lasted almost a year. What was about to come during 2019 might be the comedown, of an initial high.

With the end of the winter period, a new shock came. Dojo-san announced on YouTube Eko-san as his new successor. Again, I expected a lot to happen, but not that. The sangha was worried, none of us could imagine Eko being fully in charge of Antaiji. Nevertheless, I promised myself to stay in Antaiji, at least until the end of this year, to see how things develop. “I still can leave next year, if I don’t like the changes to come”, I thought to myself. After the announcement, once the winter reports were handed in, regular Samu started again, and with that new responsibilities came. Hatake, Shizui, Maki. The involvement in Antaiji accelerated like a formula-one car, with no regard for your own personal comfort. The sudden leaving of people who planned to stay at least until the end of 2019, didn’t really help either. More work for fewer people. Nevertheless, I still felt content about Antaiji, my dharma brother, John from Australia who arrived with me on the same day at Antaiji was still here. The two of us would stick together, going together through this year of big change, I thought to myself. The year continued, in April I shaved my around shoulder-length long hair, took on a new name, and became together with John (after Hosen) and Bushin, Muho’s last disciples. “The last three samurai”, we often laughed. In May, soon after Bushin went home, his usual short-term practise time was over, John/Hosen also decided to leave. And so, all of a sudden, I was there alone with Eko, having to take care of Antaiji with two people – usually, Antaiji should be managed by at least 6 or more people. But that was not the worst, with the leaving of my only remaining dharma-brother, I felt alone all of a sudden, any type of support collapsed. A mixture of anger, sadness and disappointment arose inside of me. But towards whom? Now looking back, it was only towards myself, my wrong expectations.  The coming weeks were really difficult, not only physically but also mentally. Being tenzo and jikido alternately every cycle, fence check, watering the Hatake, the list goes on. For the first time since I arrived in Antaiji, one and a half years ago, I really doubted Zen. Thoughts of leaving Antaiji, dreams of going somewhere else, to find a place where practice would be easier, kept on bothering me, day in day out. I wondered if it is really all worth it? When does this mix of boredom and hardship finally pass?

I remember a talk from my early days of Antaiji, where someone said that without zazen, Antaiji would be just like a Bootcamp or the army. Yes, now I understood. Thanks to zazen, it was the only motivator to go through this difficult time, it was the only reason which made me stay. Weeks, months passed and with them also these difficulties passed. What remained was an even stronger determination, not to give up on the practice of the Buddha-Way so easily. And so during the annual July retreat, I was so sure about my stay in Antaiji, that I answered the recurring question: “Two people in this big place, is that not too little?” with a confident: “Sure, it is hard, but we can manage for the time being”.

With the end of the summer period, the time of being only two practitioners was also over. Newcomers came and I was baffled by the capability of changing a person’s personality through new responsibilities. The new role of the mother of Antaiji seemed to do wonders. I am deeply astonished how, to quote Sawaki: “Everybody’s karma is different. What’s important is the fact that everyone is pulled forward by Buddha in the same way”. Thanks to that wonderful example, I feel even more content to stay here, not to give up on the Buddha-way.

Now, the biggest lesson I took from 2019 was the meaning of practising the Buddha-Dharma “wholeheartedly”. Everyone will stick around as long as life is enjoyable, easy-going and fun. But at some points, in any career, in any part of life things will turn difficult. At these points, life seems to be testing you, if you are really sure about the path you are walking on. For me, not leaving Antaiji this year was one of the best decisions in my life I made so far.