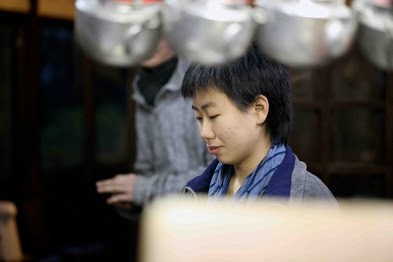 If one makes a left turn from the entrance of the library, one could look into shelves of chronically arranged files and books lamenting on pleasurable meditative experiences, pain from self-knowledge, how-to instructions for vegetable fields and rice fields… What will be written here will also appear amongst these faceless winter accounts of once lofty dreams and heartfelt enlightenments- time capsules abandoned by their creators. I hope though, I would read this report sometime in the future 10 years or 10 days and be helped, just like a lost traveller digging into the pocket and pulls out an old map of the road she had left behind.

I have been looking for reasons why I can never leave Antaiji completely. All the answers that came through my mind previously may sound very poetic, but none of them can be easily relevant to times being constantly bothered by nine other crazy people, poisonous snakes, armies of summer mosquitoes and near impossible winter which puts ten crazy people around the same fire.

“You can die here in Antaiji!”

A phrase most long-timers here love to repeat, often directed at someone who tries to be relieved from a mosquito or pain during zazen and a really useful phrase when all abilities to reason out with another person disappears. Reminding myself to die in Antaiji all the time, a phrase from Andrei Tarkovsky often came to mind:

“the aim of art is to prepare a person for death, to plough and harrow his soul, rendering it capable of turning to good”(1)

While Montaigne had famously said that to philosophize is to learn to die. How can one easily experience death when it hardly exist in life? (2) Death can only be intimately thought of as one’s last moment with life.

The most mindful moments of my life as I remember consist only of the beginnings: developing the first B and W film in the darkroom, falling with love, travelling alone for the first time. A significant life event when ended can only be brought up with reminiscence… a state of living through the past in the asylum of the present. The time between the beginning and its end or also, time between birth and death is just too long, too slow, too happy, too painful.

Different feelings of time gave us different existences.
A man too melancholic is usually homesick, he goes home from the present to his past. The present chases a man of ambitions into the future. A man tragically plagued with boredom stays permanently at home.

Boredom, a common disease interestingly was being referred to by Emile Tardieu as “the sickness of happy people”, as unhappiness from the “plenty”. (3) As we all know that we are afraid of boredom, the feeling of being stuck to the present, looking neither backwards nor forward in time. I was very bored, coming to Antaiji hoping to pull myself away from the futile days of not being able to break away from myself. The Antaiji website promised that I die on the zafu, that one can finally forget the much dreaded time in between birth and death, every breath on the zafu is the last.

So I arrived on the 26th March 2012, the beginning of my life when I finally knew that I was physically challenged, not being able to move myself up a slope without being on fours, always losing balance, falling down, finishing breakfast 10 minutes later than everyone else, hearing my name mispronounced across the corridor 10 times a day, being corrected about my behaviour 10 times a day too.

For the first few days at night I was always wondering if packing my bags the next morning would be such a natural thing to do without thinking. I didn’t come to a monastery with stories of people partying to lots of sakes and chocolates, to be around people trapped in karmic actions who kindly tried to save me from my karmic actions every day. But I came to die five days, so I would do that first.

Writing down my experience of a five-day sesshin would sound no different from a 5-day Bali retreat on mushrooms- the view into the universe of one’s mind in the span of five days. I was happy to give myself up to pain for the first 45 minutes, and then despairing that I have to die recklessly over again the second, third, _th number of times. One can’t leave the zafu when weather worsens, or when one is sleepy or painful. At times when it is impossible to do nothing, one can continue to perform a great show of endurance on the zafu, or rescue your neighbors from dull nothingness by falling asleep or vigorously moving your body.

The body in pain was often like a dog on leash, fighting stronger with every attempt to hold it back. Docho-san said to me in response for my desire for pain on the first interview “no pain, no gain.” There were lots of pain and no gain. With zazen, one cannot move in real time and space. A man changes when given enough pain and time, it takes 10 years to be a glass blower, 8 years to be branded a Dusseldorf photographer, 6 years to graduate from medical school, yet, there is no beginning or an end to the self in zazen. One actively dies on the zafu, a dead man is powerless to become anything. A dead man breathing on the zafu is the man beyond passions, choices and other by-products of the ego.

Ego is the part of me I struggled against… Its force is like a child, who dislikes boredom, who chases after all good feelings for my body or self-identity in this world. The child who cries during zazen when there is nothing more to feel. The one who wishes to feel good from zazen. The child who feels repression. In the past, in order to know my ego, I try to antagonize it, for example, making myself do something that obviously makes me very unhappy, or doing something I strongly disagree with. But I am also falling into the same ego trap… as I had become slave to my emotions, by making feelings the end product of my activity.

Before Zuiki-san had left Antaiji in September, he said to me that in order to find out the most important thing to life, I must learn to give up slowly… to part with the 1st thing, the 2nd, and then if possible the 3rd one until the last thing… That will be the thing that my life can’t do without. Still, it didn’t feel satisfying to me, all desires streams from forces of the ego. The egoistic mind naturally wants to gain, parting with everything to the last desirable one only serves to direct stray forces of the ego in one direction, it is not yet the death of one’s ego. How can I live without my ego? Getting pulled in all directions by my ego always troubled me, and trying to give up my ego troubled me just as much.

It reminds me of washing dishes during the rush hour of the day… after some time washing oily dishes, I try to wash clean dishes with oily hands thinking that the dishes are oily. Another person would be able to feel the dishes and tell me if they are clean or still oily. But at the moment when my hands are oily, I will never able to know if the other person had oily hands too.

It is the same when I was told to do something in Antaiji, it became confusing for me if I was leaving my ego behind when I obeyed the instructions given to me, or, I was afraid of being seen as a rebellious person by disobeying instructions. If the second situation was true, then I am more egoistic than if I spoke up and risk offending another person.* But since I am never sure if I had oily hands in the situation, I will hope that the other person still kept their hands clean with the situation.

“In learning the Way, you must depart from your ego…
… Underestimating yourself, thinking that you are not capable of practicing the buddha-dharma is also due to ego-attachment. To be concerned with the views of others and to care about human sentiments is the root of self-attachment. Just study the buddha-dharma; don’t follow worldly sentiments.”

However, in the ruthless river of time, the death of worldly sentiments, my ego or body hardly matters. The life of a man (4) is but a blink of an eye in the span of 550,000,000 years since the Cambrian Explosion. A day in the life of a man gives birth to 48 generations of a Mayfly. It does not matter if I have spent too much time with fantasizing, watching films, sleeping, reading dead authors and performing zazen. It matters now that I start traveling on the road in reality after drawing up too many maps from dead philosophers and artists. I know that I am making an easier choice at this point of time to close myself up in a monastery from random forces of society, sometimes I get bored on the zafu like I get bored in my room. I just think that I will leave Antaiji when my hands are finally clean after 25 years of oily hands, even though they may still get oily from time to time again.

* Tsukan had mentioned about a similar relationship between identity and intention in the his last Rinko of 2012.

4. “The length of our days is seventy years– or eighty, if we have the strength; yet their span is but trouble and sorrow, for they quickly pass, and we fly away.” Psalms 90:10 Bible, New International Version