What is so great about Sawaki Kōdō?

More than twenty years have gone by since the death of Sawaki Rōshi, a leading figure in the world of Zen who was active from the twenties to 1965. Even today, the immense influence that he has had on our society can be felt. Yet the conditions he was born into were unimaginably difficult and impoverished.

He was born in 1880 in Mie Prefecture. Japan was in the process of reforming itself politically and the new nation still lacked a stable foundation. In those uncertain times, when he was only four years old, his mother passed away, and when he was seven he experienced the sudden death of his father. The four brothers and sisters were divided among the families of relatives or became servants. Sawaki Rōshi, who was called Saikichi as a child, went to an uncle’s home. This uncle though also passed away a half-year later, and he was adopted by Sawaki Bunkichi, who officially operated a paper lantern business in the town of Isshinden, but in reality made his money through gambling.

This is where Saikichi spent his four years of primary school. As he started late, he did not finish until he was twelve. The boy worked as an errand boy for his step-parents. He learned about the world of gambling by selling rice cakes in the casinos and keeping an eye on the guest!s sandals. Once he witnessed how a fifty-year old man, who had hired an eighteen-year old prostitute, died from a heart attack, and how his wife came in the next morning crying, “Even in death he has to make things difficult for me – and in a place like this!”

So Saikichi as a young boy had already experienced what happens behind the curtains of our complicated world. Shortly after having finished primary school, a bloody dispute took place between roughly seventy gangsters fighting over the borders of their territories. In the evening, Saikichi’s step-father was faced with the unthankful job of establishing contact between the fleeing gangsters. Shaking with fear, he was unable to fulfill his mission. In his place, Saikichi volunteered. In the middle of the night, in a terrible rain, he crossed the scene of the bloody battle and reestablished contact between the gangsters who were already 10 km away. From that night on, his step-father began to fear him and stopped beating him.

Though Sawaki Rōshi spent his childhood years in such a milieu he also had other role models. There was the Morita family, who were scraping out a living in a run-down backhouse. The father glued calligraphy rolls while the son studied traditional Japanese painting. Saikichi felt drawn to this family, whose life, although it took place in the most impoverished conditions, had something very pure about it.

So he began to come and go at the Morita home. He studied old Chinese and Japanese history and literature from the father of the Morita family. Moreover, he learned the truth that there are things in life more important than money, position and fame. Later, Sawaki Rōshi himself said that this was how the bud formed, out of which the fruit of his later life ripened.

After finishing primary school, Saikichi took over the paper lantern business, which was how he fed his hedonistic adoptive parents (his step-mother had been a prostitute). Yet gradually he was beginning to open his eyes to his own life. He began to wonder if it was right to live his life like that and later only marry and feed a wife and children. He didn’t know up from down, but his mind clearly yearned for the way.

When he ran away for the first time, Saikichi ended up at the home of an acquaintance in Ōsaka. Yet this escape was unsuccessful: his adoptive parents picked him up again. The next time, he was determined to run so far away that no one would ever be able to catch him again.

As a 16-year old, with three kilos of rice on his shoulders and 27 Sen in his pocket, he marched with the light of a single lantern to Eihei-ji temple in Echizen, constantly chewing on the raw rice throughout the long journey. Eihei-ji could not be bothered with the runaway and Saikichi was refused entry. For two days and two nights, he waited without food or water in front of the gate in the hope that his request would be heard: “Please ordain me as a monk or let me die here before the gates of Eihei-ji.” In the end he was taken in as an assistant in Eihei-ji’s workshop. Later he helped out at Ryūun-ji, the temple of a leading priest of Eihei-ji.

At one point he had a day off and decided to do zazen in his own room. By chance, an old parishioner who helped out at the temple entered the room and bowed towards him respectfully as if he were the Buddha himself. This old woman usually just ordered him around like an errand boy, so what was it that moved her to bow towards him with such respect? This was the first time that Sawaki Rōshi realized what noble dignity was inherent in the zazen posture, and he resolved to practice zazen for the rest of his life. In his old age, Sawaki Rōshi often said that he was a man who had wasted his entire life with zazen. The point of departure for this way of life lay in this early event.

Due to various circumstances, his wish to become monk was finally granted and he was ordained in S!oshin-ji in distant Kyu!sh!u. At the age of 19, he entered Ents!u-ji in Tanba as a wandering Zen monk [unsui] but only stayed a fortnight. From there, he was sent to another temple in which he met Fueoka Ry!oun Rōshi. They understood each other well, and Sawaki resolved to follow Fueoka.

Fueoka Rōshi had studied for years under Nishiari Bokuzan Zenji, a great Zen master of the Meiji Era (1868 to 1912), and the longer they were together, the more Sawaki Rōshi was attracted to his straightforward character. Sawaki Rōshi heard lectures from Fueoka Rōshi on Gakudōyōjinshū, Eiheishingi and Zazenyōjinki, which formed the basis of his later practice of shikantaza.

Following that, Sawaki was drafted as a soldier in the Japanese-Russian War (which broke out in 1904) and earned a golden medal. At the age of 26, in the year 1906, he returned to Japan. After the war – rather late for his age – he entered the Academy for Buddhist studies in his home town. After which he transferred to the seminar of Hōryū-ji in Nara where he studied Yogacara philosophy under the abbot Saeki Jōin Sōjō.

At the age of 34, after having obtained this overview of Buddhist teaching, he began to practice zazen alone from morning until night at Jōfuku-ji, an empty temple in Nara. Here shikantaza penetrated his flesh and blood. In 1916, when he was 36, Oka Sōtan Rōshi, recruited him as a teacher for the monks in Daiji-ji in Higo. After Oka Rōshi’s death, Sawaki Rōshi lived alone on Mannichi Mountain in Kumamoto and with this as his base, he began to travel to all parts of Japan to give instruction on zazen and hold lectures. When he was 55, he was appointed professor at Komazawa University. At the same time he became godō (a head teacher) at Sōji-ji, one of the two main temples of the Sōtō school. This began the period of Sawaki Rōshi’s greatest activity.

At that time, “Zen” didn’t mean much more than the kōan Zen of the Rinzai School, but Sawaki Rōshi concentrated entirely on shikantaza as it had been taught by Dōgen Zenji. Looking at the history of Japanese Buddhism, it cannot be overlooked that Sawaki Rōshi was the first in our era to reintroduce shikantaza in its pure form and revive it as being equally valid as kōan Zen.

Because he never lived in his own temple and also did not write any books, people began to name him, “Homeless Kōdō”. Yet in 1963 he lost the strength in his legs and he had to give up traveling. He retired to Antai-ji where he died in 1965 at the age of 85.

For those who seek more information about Sawaki Rōshi’s life, there are several Japanese biographies. Here I have only brought together a few snapshots out of his life to give a rough picture to those who know nothing of him. These snapshots present the character of his adoptive step-father and the Morita family, his zazen experience in Ry!uun-ji and his encounter with Fueoka Rōshi – in short, the seed and bud out of which Sawaki Rōshi’s life blossomed. 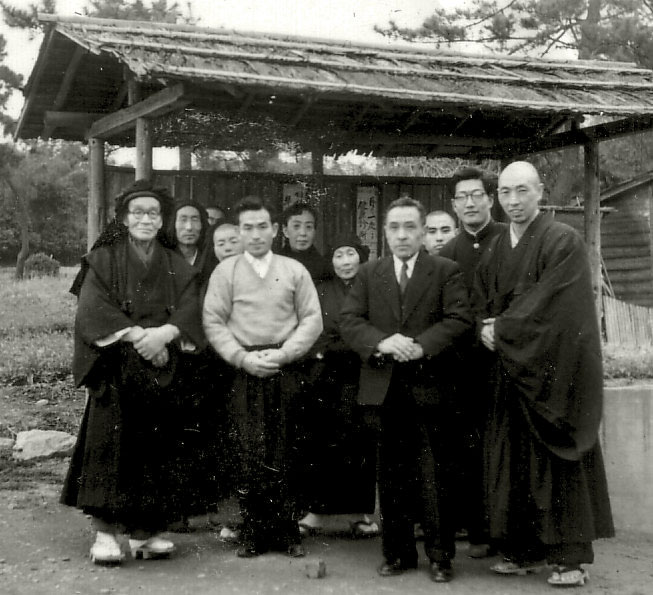