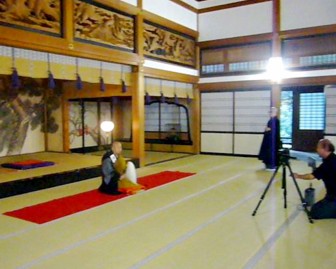 In the September issue we had a look at what kind of kufû (effort) a real-life Japanese Zen-master does during zazen, in this case when it comes to improving the posture and dealing with sleep. Now let us get back to the steps in the carrier of a monk inside Japanese Soto-shu, including the little absurdities and all. Step 5 is called zuise which isn’t easy to translate. Zui means “auspicious”, se is “the world”. Originally, it seems that it meant the same as shusse, i.e. to get promoted to an office, to make a carrier step. Maybe it can also be interpreted as “to make an auspicious announcement to the whole world” or something along those lines. To use the boy-meets-girl example once more: If they fall in love with each other at tokudo and get engaged at risshin, then shihô might be something like proposal (which happens only between the two of them, with no-one else involved), ten-e is something like going to town hall and changing one’s name (the monk changes his robes, making the dharma transmission official) and zuise is the big wedding to which every one in the family gets invited.

In Japanese Soto-shu, zuise is done twice, once at each of the main monasteries (Eiheiji and Sôjiji). In Japanese, it is also called ichiya-no-jûshoku, which means “abbot for one night”. Only after you have been the abbot of both Eiheiji and Sôjiji for one night each are you considered an oshô, i.e. a teacher. As we saw in the July issue, oshô is the third out of four hôkai (dharma ranks), only surpassed by dai-oshô (“great teacher”). There are seven sôkai (priest ranks) among oshô anddai-oshô, which depend, among other things, on the elngth of your carrier and how long you practiced ango at a formal training monastery. As we have seen, becoming an oshô entitles you to were a colourd (usually brown) kesa robe and a fancy hat.

If my memory is right, you have about two years to complete this step after ten-e, but the interval between doing zuise at Eiheiji and Sôjiji respectively must not exceed one month. Being the “abbot for one night” at Eiheiji and Sôjiji is easier than it sounds. You only have to make an appointment beforehand at both places. They are open all year round, all though zuise might not be possible on certain days. They will send you information about when to come, including a dress code. You will also be informed that you have to pay 50.000 Yen on arrival at each Eiheiji and Sôjiji. That is about 1200 US dollars (Nov. 2010) altogether, plus travelling expenses. But then again, it is something like the equivalent to a wedding ceremony.

If you thought that being “abbot for one night” means that Eiheiji’s or Sôjiji’s chauffeur is waiting for you with a limousine at the train station, you are wrong. You have to get to the temple gate by yourself until the appointed time in the afternoon. I went from Antaiji to Eiheiji in the summer of 2000 with our temple’s offroad bike. The monk in charge looked surprised when I told him that I was “tonight’s abbot” and looking for a parking lot. I had to change dress in a public toilet in fromt of the gate, as the “abbot for the night” is supposed turn up in koromo and rakusu, not the filthy samu-e I was wearing. After paying my 50.000 Yen at the front desk, I was shown to my room. Being the “abbot for one night”, I expected to be shown to the best quarters in the temple compound. And the room I was led to was quite spacious, but to my surprised three other oshôs-to-be were already in there. Altogether, we were four abbots for the night. The rest of the day was spent rehearsing for the next mornings ceremony. Not only were we not giving the keys to the monastery, we did not even see the real abbot (who was – at the time – about 100 years old). Of course no-one was waiting for our orders, rather we were expected to follow what we were told. It turned out that being “abbot for one night” meant nothing but filling the space of dôshi at some of the next morning’s ceremonial rituals. This turned out to be farely easy, because as the only foreigner I was placed last and just had to follow the movements of the three Japanese before me. 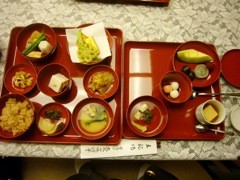 The biggest treat you get for your 50.000 Yen is the fancy meal following the ceremony in the morning. I hear that the unsui that work in Eiheiji’s kitchen get up at one o’ clock in the morning to prepare this meal for the “abbots”. The whole affair ends with a photo session. Fortunately, my seniors at Antaiji had warned me that I would be billed another 50 dollars for the photographs, so I avoided having my pictures taken by the professional Eiheiji camera-man. If you bring your own camera, you can ask one of the unsui to take a snap shot of you. When you leave before lunch time, you will receive a whole bag full of memorial goods depending on the day, ranging from stuff like kotsu sticks, tea bowls and silk handkerchiefs to books authored by the real abbot of Eiheiji or Sôjiji. My bag even contained a set of postcards! I was reminded of one of those fukubukuro grab bags they sell at Japanese department stores at New Year’s.

A couple of days later, the procedure at Sôjiji was more or less the same, except for minute details. Traditionally, the monks turn anti-clockwise after offering incense at Eiheiji, while they turn clockwose at Sôjiji. Or maybe it was the other way around. Anyway, they will tell you that. Also, they wear their kesa in a different way. Both the Eiheiji and Sôjiji way of putting on the kesa do not make much sense when you wear the nyohô-e in the tradition of Sawaki Rôshi. To my surprise, the monks at both Eiheiji and Sôjiji had never seen a nyohô-e, nor had they any clue of how to put it on. I somehow had to figure out how to adjust the nyohô-e to their idea of how it was supposed to look.

One of the lessons to be learned not only at zuise but throughout practicing in a Japanese setting is this adjusting to different circumstances. Amost never will people ask for your opinion. Alomost always will people expect you to listen to what they have to say. And that even goes for the “abbot for one night”. I would not be surprised if even the real abbot would spend most of the day just following the instructions of his assitants. Following others makes up for about 99% of practice here in Japan.

At Sôjiji, I was not alone either. Masanori, who had been with me at Eiheiji the previous week, was with me again. His name was written with the same two characters that form the shôbô of shôbôgenzô, but for some reason he preferred the secular Japanese reading (each Sino-Japanese character can be read in at least two ways, a Japanese kun way and a Sino-Japanese on way). We had met and talked at Eiheiji, and at that time he had told me and the two other “abbots” that he was working at a friends company in Tokyo. Just as the other two Japanese, he was born as a temple son and his father expected him to take over the family time as soon as he would retire, but as it was a small temple in the mountaineous Nagano prefecture, he had to work while his father would take care of the temple. Being only the two of us in Yokohama (which is part of the greater Tokyo metropolitan area), he told me that in fact he was not working as an employee, but as a professional pachinko player. “I can make so much more money playing pachinko than performing funerals, I don’t even know if I want to return to Nagano at all”, he said. At night, he wanted to show me China town in Yokohama. He asked the unsui who was in charge of us: “This foreign monk here is still hungry. Is there a way for us to leave the monastery at night and examine Yokohama”s night life? After all, we are the abbots tonight and maybe you would like to join us?” The unsui asked us to wait for some minuetes as he would consult with his seniors. After he came back, he told us politely: “Having been here for less than a year, it would not be considered appropriate for me to company you outside. Also, I am obliged to tell you that it is not permissable for the abbots for one night to leave the monastery compounds. But, just for your information, the third door on teh left side of this hall way is not locked at night. It connects to the garden and from there, you can get to the subway station. Training monks use it as a kind of emergency exit.”

I do not know if we were the only “abbots for one night” who used this “emergency exit”, btu a friend told me that the following year he found a printed manual for the “abbot for one night” in his room in Sôjiji, that stated that leaving the monastery over night was absolutely forbidden. But then again, the fact that something is forbidden in Japan does not mean that it is not practiced.