II – A Delicate Flower and the Trump of Zen (1)

II – A Delicate Flower and the Trump of Zen (1) antaiji
The original Antaiji was located in an area named Gentaku, in the northern part of Kyoto. While founded for the research of Eihei Dogen’s Shobogenzo in 1921, it was made famous by Kodo Sawaki and Kosho Uchiyama, who began using it as a place of practice after the second world war. In the late 1960s, hippies from the west flocked to Asia to learn more about Buddhism, and some ended up at Antaiji – under the abbacy of Uchiyama at the time. Unlike other Zen temples, Uchiyama’s Antaiji welcomed westerners from all walks of life, male and female. He was a frail and gentle figure, the complete opposite of his strong and powerful master Kodo Sawaki. Uchiyama would always use the phrase, a violet blooms as a violet; a rose blooms as a rose, when comparing himself to his teacher. While there were impressive characters like Sawaki that resembled roses, there were also precious violets like Uchiyama. When he became abbot, after his teacher died, Uchiyama relied on his first monk Koho Watanabe who, like Sawaki, was no delicate flower. When Watanabe succeeded Uchiyama in 1975, he sought to create a style of practice reflecting Zen’s Chinese roots in self-sufficiency – and get rid of some of the hippies in the process. So, the year after, he decided to move Antaiji to its present location, on a remote mountain in northern Hyogo. Unlike Uchiyama, his style of teaching was hard and tough. He has been compared to a yakuza boss, army general and, most recently, as the Trump of Zen. (Edward Moore) 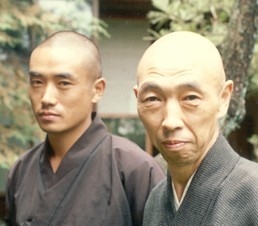 Muho: Watanabe was adopted. For the Japanese, that’s quite a big deal. It’s taken for granted that if you’re raised by a couple, those are your biological parents. So if those parents have their own children, you would feel as though you didn’t belong with that family. In the Japanese household, there is a hierarchy and if you don’t have a blood relation, you’re not really on the ladder at all. I think that set him on the path to monkhood. If you’re not part of society, you can either become a yakuza or a monk.

In my view, I think that Watanabe might have been looking for this father figure. And he found Uchiyama who – unlike Sawaki, a charismatic leader type – was a warm person, an intellectual, and someone critical of Japanese society. And, most importantly, was an outsider who was completely comfortable being an outsider. Someone who had no complexes about something the rest of Japanese society would suffer from. I think that fascinated Watanabe.

Uchiyama became abbot in 1965 but they first met in 1962. Watanabe was ordained somewhere where he grew up in the Tohoku region. His foster father already knew Sawaki. He’d met him and attended his talks. Through the introduction of Sawaki, Watanabe was ordained in a temple somewhere in that area of the northeast. Then he was sent to Daijoji, in Kanazawa, which is on the coast of the Sea of Japan. Because Sawaki was still officially part of that temple – at the time he was still known as Homeless Kodo.

But after six months, when Watanabe was a trainee monk, Sawaki retired from Daijoji. He was still teaching in Tokyo. When he retired he said, why don’t you go to Kyoto. I have a student named Uchiyama there; train with him. Shortly after Sawaki got sick so he also went to Kyoto.

When I would speak to Watanabe it seemed he didn’t hold Uchiyama in the highest terms. There was this one thing he said that, if I had to give him grades from 0-100, I would give him minus 50.

The schedule at the old Antaiji was a little bit different from now in that on regular working days you would get up at 5am to do zazen, so it was one hour later. But sesshin was the same as now. Uchiyama wouldn’t come to morning zazen, he would get up around 10am. He’d ask Watanabe, can you bring me the newspaper. Then sit down and say, ah my head hurts, can you give me a massage.

But still, today Uchiyama is famous. And Watanabe would say, you know why? Because I made him famous. That’s why I could imagine this phrase I learnt from Miyaura, you create Antaiji, stems from him. Because Watanabe said I created Uchiyama. It’s the student who creates the teacher. When you’re the student, it’s important that you find the right master but it’s not the master who creates you. You have to create the master. He never said the same thing about Sawaki. For him, Sawaki was this guru-like figure. Because he spent a lot of time with Uchiyama, he knew all his weak points.

There’s all this Sawaki memorabilia in my closet. When I visited Watanabe’s temple when he was old in Wakayama, he also had this collection from Sawaki. He treasured this stuff very highly.

Edward: When he says, I created Uchiyama, does he mean he was like his PR and PA?

Muho: Yeah, he was basically running Antaiji for him. Uchiyama was a bit of a recluse. I doubt he came to evening zazen. What he did do was sesshin. Outside the sesshins, if he was there, he would be reading the newspaper at lunch.

He wasn’t a person who, through his words or example, would create an atmosphere of discipline. So, I think he relied a lot on Watanabe. The reason the whole thing stayed in place was because Watanabe would keep it in place. Uchiyama would gives his talks and continue Zen practice, Watanabe would keep the thing running. But the vision came from Uchiyama.

Edward: Apparently Uchiyama had a private booth during zazen.

Muho: That’s a rumour I heard. He liked his privacy.