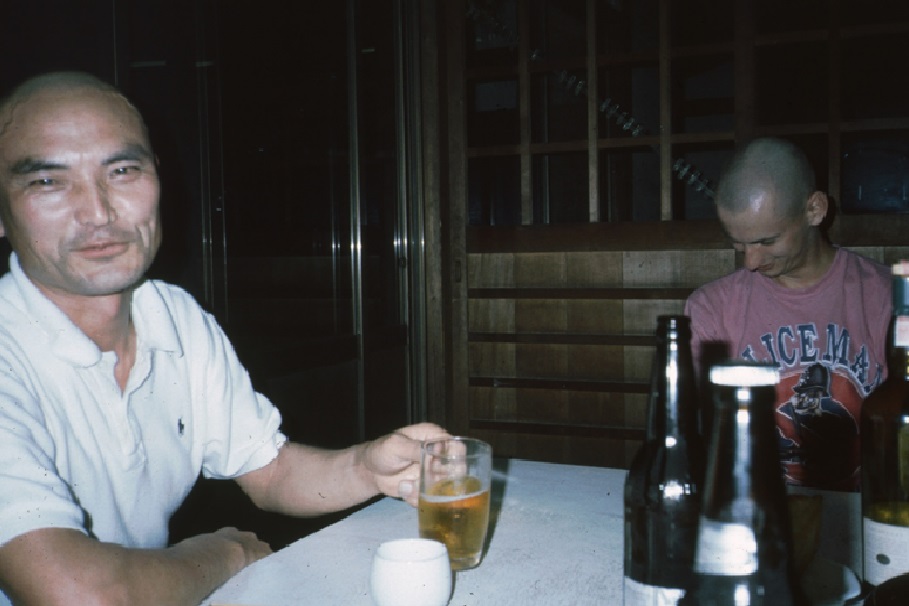 Were they living extravagantly during Watanabe’s time?

Muho: You could say that Miyaura gave us a koan when he said: We need money, but you must not do takuhatsu. He wanted us to become serious. Not living in your mum’s basement or on the Internet. Who is paying the rent at Antaiji? Just reading Zen books and sitting under the tree is not enough. If it had been only about the money, doing takuhatsu would have been enough. But it was more than that. I think it was about the dharma.

Edward: Was Watanabe always criticising in the background?

Muho: I think so. When he was in Italy, he would send letters or stuff like that. He probably heard rumours about Antaiji from others but he was also busy with his mission in Italy. He went there to spread the dharma but nothing happened. So maybe he didn’t feel he was in the position to criticise Antaiji then.

When he got back to Japan, he was told he had cancer and would die soon but he didn’t die. So he went to a temple in Wakayama. One thing that happened that could have had a major impact was that Uchiyama died in 1998.

Until then, even though Watanabe was the former abbot and moved Antaiji here, there was still Uchiyama and he was an even bigger figure than Watanabe. If Watanabe had told Miyaura to get out of Antaiji while Uchiyama was still alive, he would have intervened. He wouldn’t have liked it at all.

When Uchiyama died, I think certain things changed with the way Watanabe related to my teacher. The funeral for Uchiyama wasn’t done here but after one and two years there were ceremonies held at Antaiji. In preparation for these, Watanabe visited here and, I don’t know what it was, but he seemed to be very dissatisfied with the attitude of my teacher and the way Antaiji was.

Edward: This was during the money-making period?

Edward: What could he have been picking out?

Muho: There weren’t many people. There was a short period when there were 12 but mostly it was five or six. But these five or six mostly were people who had no place to go and couldn’t succeed in society. This still happens and probably existed from the time of Shakyamuni. Miyaura didn’t kick these people out. The way I understand it, he didn’t judge too much when people wanted to practice at Antaiji.

Watanabe had the idea that during his time it was much better but that Miyaura was the reason it was out of shape. I mean, now Antaiji is not so impressive either. But at the time, you wouldn’t think, wow these are super monks. Basically, we were a bunch of social failures.

That probably was the case at Watanabe’s time as well. And then again, what came out of his mission in Italy? Nothing. He was always a big talker but what was the result of the work that he did? Not so much. He moved the place from here to Kyoto, respect for that. But one reason why that was possible was because they had money. But he never explained how it could be maintained without the money.

One thing he told me was, I made sure there would be no money leftover when I retire because money obstructs the Buddha way. In the Shobogenzo Zuimonki, Dogen speaks about the rich Chinese guy who throws his money into the river instead of giving it to the poor, because they would become decadent too. So the best thing you can do with money is throw it away.

That’s easy to do if you have the money. At the end of the day, Dogen still had a patron that built Eiheiji for him. With Antaiji, the question of what’s going to happen after 50 years when these buildings are all rotten and need to be replaced was never posed. At the time of the Buddha, the rule was to do takuhatsu before noon and you should not live further from the village from where the last cow tracks stop. Which means you need to be in reach of society so that people can support you. Antaiji is quite far away. It’s not possible for people with a lay life to come and join the practice. Farming is not enough, you need to pay the bills. And selling vegetables just didn’t work.

Edward: So until the end of his time, Watanabe had money?

Muho: Yeah. In the beginning, Watanabe had married but he didn’t bring his wife. After three years, he called his wife and built the complex where I’m living now. They say he built it with his own money, but he was a simple monk without income. So where did this money come from?

There’s this kind of not so transparent thing. When I became abbot, I went to the town office in Hamasaka to see which land we actually owned. According to their records, I surprisingly found lots of land that was registered as Watanabe’s private property. He owns part of the forest where the old rice field was. All of that was kind of strange.

In Kyushu, we visit this temple each year in Obon, in August, and at one point I heard Watanabe sold calligraphies that were collected by Kodo to them. We still have some of these here, as well as some old kesas that Kodo owned. Uchiyama made a catalogue of these kesas but not of the other Kodo stuff. From the stuff in the catalogue, there is one kesa that is not here anymore. With the calligraphies, they are numbered. There were around 100 but half of them are not here. I heard from this one temple, that they bought one of these very precious calligraphies from Watanabe for around $60,000.

I could imagine that, because there is no record of that sale, Watanabe kept the money for himself.

Edward: Could you speak a bit more about these calligraphies?

Muho: The guy who bought them practiced with Uchiyama for three years and had a lot of respect for him and Kodo. This calligraphy I’m talking about is by Ryokan Taigu, who is really famous in Soto Zen. Because it had been owned by Sawaki, it was even more valuable.

Some of them had personal value to Sawaki too, like from the time when he was living with his foster parents. There was a shop, in this rough neighbourhood, where Sawaki was taught calligraphy from his friend, the son of the shop owner, Morita Chiaki. He claims this person changed his direction in life.

There’s a couple of calligraphies by a famous guy named Jiun as well. From 300 years ago, somebody from the Shingon sect. A mixed collection. They’re in my room.

Edward: So Watanabe spent everything as a sort of teaching? That does sound strange.

Muho: Well he wasn’t attached to it by stacking it up. He was like a rockstar; if he had money, he would spend it. And let his fans be part of the party. And if he needed more money, or ran out, he would ask people for it. But he was never really broke.

So without that money, it was during Miyaura’s time that Antaiji became properly self-sufficient?
Yeah, I think Miyaura really tried to do that. Now that the party is over, let’s get really serious, he said. “If people in Kutoyama can live self-sufficiently, so can we.” But it proved to be not so easy.

People come here to get out of the hamster wheel. Maybe these people first don’t like the way we have team meetings and talk about work efficiency. Kodo said, loss is satori; gain is illusion. So how come we always think that we need this amount of rice and vegetables. Personally, I had this illusion. Like Jesus says in The New Testament, look at the birds, they don’t worry about having enough to eat, the flowers don’t worry about looking beautiful, God gives to all of them.

You have this idea that you come here and live amidst nature, and that there’s going to be something to eat. You don’t have to eat sushi everyday. And if there’s no sake, we don’t have to have it. But you need at least some rice and vegetables. And to grow that, you need to get real about it. Sure, letting go on the zafu is nice but where do you stand after that?

Edward: Do you think Miyaura’s definition of self-sustainability was different to Watanabe’s?

If you wanted to be really self-sufficient like people were 500 years ago, that takes quite an effort. Where do the salt and sugar come from? How do you press your own oil? Can you make your own clothes? How about medicine? Can you build a plow? A hammer and nail? Neither Miyaura nor Watanabe thought so far ahead when they talked about self-sufficiency

Edward: What was Miyaura’s reason for building the zendo?

Muho: Because he thought that the hondo was not suited for zazen. In the winter, it was too cold – the stove didn’t work because the hall was too big – and in the summer, it was too hot. So he built this zendo, also as a commemoration to 20 years of Antaiji at this location. It was done in 1996.

During that year they skipped all the sesshins, which for Miyaura was a revolutionary thing. They just worked from 5am until night doing construction.

But then it turned out that in summer it’s even hotter in there. Also, I never liked the lights, it felt like a hospital room. It was never the ideal environment for zazen. It’s a great library and good for drying. We used that for another four years for all our zazen.