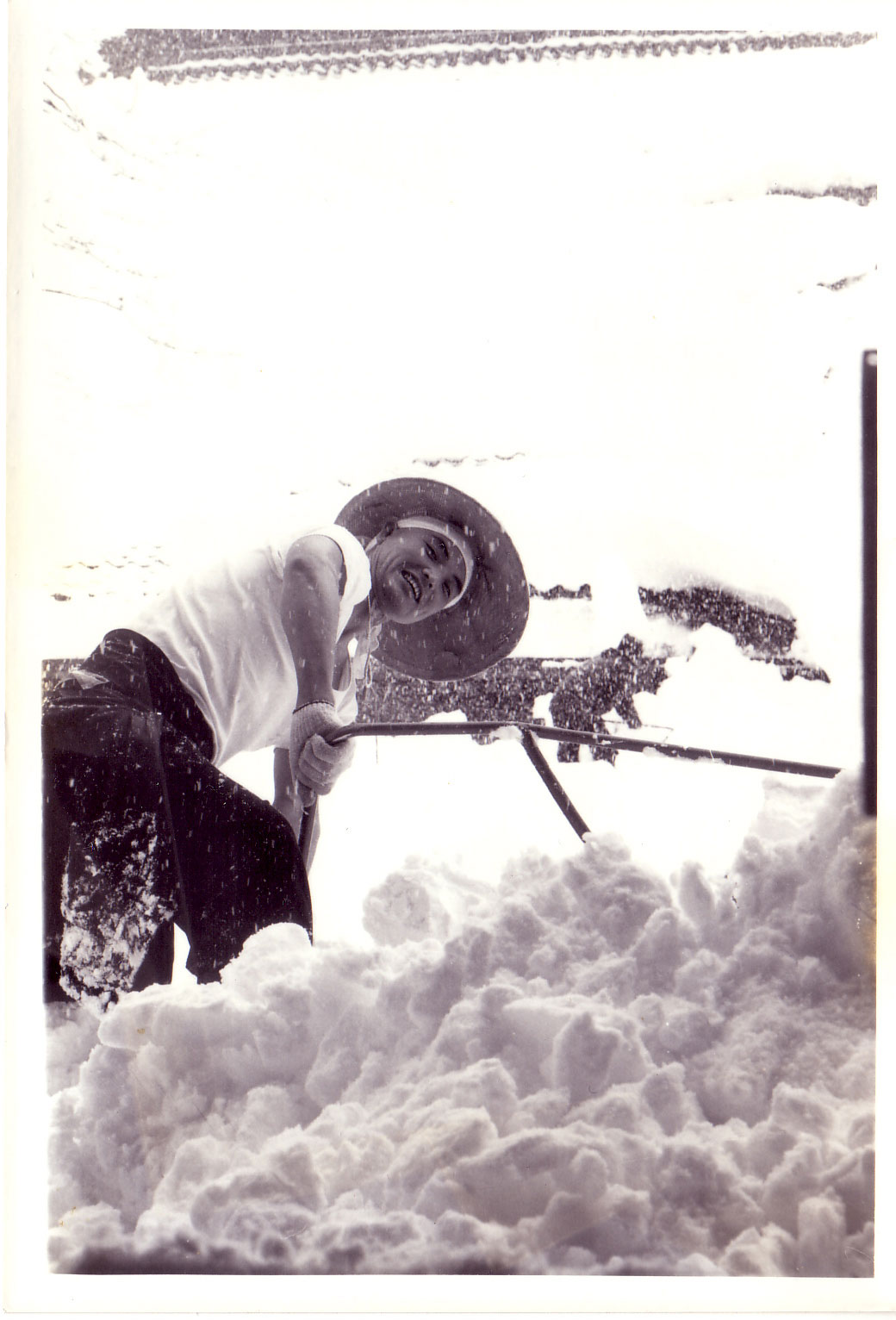 By the roadside leading up to the temple he watched over, Shinyu Miyaura was found fatally wounded, face down in the shallows of the mountain’s river. Some hours before, the abbot had driven a bulldozer over the bank and was crushed beneath. While the vehicle moved up towards Antaiji, he stumbled a few feet in the other direction before collapsing unconscious.

His body was discovered by an American monk. A practitioner at Antaiji for over a year, this monk was with Miyaura shortly before the accident had happened. Miyaura was using the bulldozer to help bring down a guest who stayed at the temple the night before. As it was 14 February, the middle of winter, there was too much snow on the road for a regular car to drive through without assistance. While Miyaura was saying his goodbyes to the guest at the bus stop by the base of the mountain, the American monk was told to go ahead back up to Antaiji as it would soon be time for the communal bath. After a few hours, he and the other residents realised something was wrong, so they made their way back down the mountain to search for Miyaura. One could only imagine the shock of discovering that wreckage, and seeing their teacher’s broken body amidst the blanket of white covering the landscape.

At the hospital at the nearby town of Hamasaka, while the outcome was already obvious, Shinyu Miyaura was declared dead. How he was unable to jump off the bulldozer, a vehicle moving at no more than a walking pace, remains a mystery. Many believed he had a heart attack and lost consciousness at the wheel. Some also thought the accident was alcohol-related, as he had a booze-fuelled party with the guest the night before. In fact, during the run up to his death, Miyaura was drinking heavily on a regular basis. For the winter newsletter sent out that year in 2002 – the lunar year of the horse – he had drawn a picture of an intoxicated steed laying down on its side. That year, sake was clearly on his mind. While throughout the whole of his 15-year abbacy, Miyaura enjoyed drinking daily, this was usually more as a sort of communal glue. Nothing rivalled a cold beer or whisky with the other residents in the evenings after zazen. Though as time went on, alcohol became more and more of a solitary activity, often causing him to withdraw to his private quarters. On some days, he would be drunk before lunchtime. As with the accident, the reason for Miyaura’s alcoholism was always up for speculation. But it was clear that he had been on a downward spiral in the run up to his death. And that there was something about trying to run a secluded, self-reliant monastery like Antaiji that crushed him.

After the confirmation of Miyaura’s death, his loved ones, as well as old friends from Antaiji, headed to Hamasaka to prepare for the funeral. Among them was his dharma heir Muho Noelke, who had been staying for six months in Osaka Castle Park, living in a tent and teaching zazen. That day Muho had received two phone calls. One from an old Antaiji senpai, saying that Miyaura had been taken to hospital. The second from the previous abbot, to inform Muho that his teacher had died. He arrived in Hamasaka at 10pm in shock.

“Usually in such cases you’re in this high, agitated state,” says Muho. “For the first few hours I was just trying to contact as many people as I could to inform them. It was crazy that it should happen at this time, in this way. I felt sad that I would not sit with him once more in the hojo room and talk about whatever was on my mind. Although I knew I could never be in my teacher’s house and have my teacher in my house, it would have been nice to at least speak from door to door once more. But of course it was clear that wasn’t going to happen.”

Aside from the surprise of Miyaura’s death, something else was on Muho’s mind. Was he to be the next abbot? His reason for leaving Antaiji had been due to a dispute between the former abbot and Miyaura – the year before in 2001 – in which the former abbot came to the temple and tried to force his succesor to step down. The former abbot was planning to take over once again and, having formed a close relationship with Muho over the years and feeling too old to run the temple on his own, wanted the young German monk to be his right-hand man. But, wishing to remain loyal to his teacher and feeling awkward with the position the former abbot put him in, Muho decided to leave.

Returning to Hamasaka that day, six months after leaving and without knowing when he would come back, Muho could tell his life was about to change. “For me, it was the worst timing possible,” he says. “It felt so good living in the park in Osaka. I had found a new girlfriend, Tomomi, and was sure more people would join my zazen group in spring. Me and Tomomi had also planned this trip to Thailand that March. The moment I got the call it was clear that trip wouldn’t happen. I was in this spring mode, thinking I would take a trip with this girl. And I thought I could have lived the way I did in Osaka for the rest of my life.

“Then I get this call and the ground was pulled away from under my feet. But I wasn’t falling yet. On the other hand, maybe it was the adrenaline, but I felt that even though I didn’t know what was going to happen, it was going to be ok. Somehow I felt that it was just the right thing. There is necessity developing and I had to succumb to it.”

Over a month after Miyaura’s death, the decision was made by Antaiji’s board – comprised of an old disciple of Kosho Uchiyama’s and a lay practitioner who had visited Antaiji in the 1990s – to make Muho abbot. The American monk and the handful of people practicing with Miyaura that year stayed only until May, the ceremony for the 100th day since his death. Then, after that, left the new abbot on his own to start from scratch.

“By June, it was only myself, Tomomi and a new guy that had just arrived,” says Muho. After the first three years, with a small number of people coming to Antaiji then leaving, Muho was on his own again. Nobody stayed for more than a year. The pressure was mounting up. “In retrospect,” he says, “I cannot remember so much from this time as it was so stressful.”

Some seven years into his abbacy, Muho decided to take a six-month sabbatical. Now with two children, he decided to visit his relatives in Germany. It was the first time he had returned to his homeland since becoming abbot. And, during the time he was at Antaiji for his sabbatical, he was not participating in sangha life – except for attending the occasional team meeting. At that time, there were only three people running the temple by themselves.

“Eventually I enforced the three-year rule,” he says. “I got more tight and that helped to stabilise the sangha. To my surprise, more people came. But, in the end, most people didn’t pull through with staying for three years. Eko is the only one who spent more than five years here. There was also this other American guy, but he left. You need people who are willing to commit. You don’t need guys who give brilliant dharma talks, or who are great with machinery, if they are gone after six months.”

The lack of long-term practitioners was experienced by both Muho and Miyaura in equal measure. But each abbot chose a different way of dealing with this issue. While Muho took a strict approach to newcomers interested in anything other than a long-term commitment, Miyaura was simply overwhelmed by the problems and suffered internally as a result. In March 2019, Muho named Eko Nakamura as his successor. While Nakamura is sure to bring a fresh energy to Antaiji, one wonders how she will try to tackle this problem in the future. In the following interview with Muho Noelke, shortly before he retired after 17 years as abbot, I hoped to explore the root of this problem by reflecting on the history of Antaiji in Hyogo and his teacher Shinyu Miyaura.