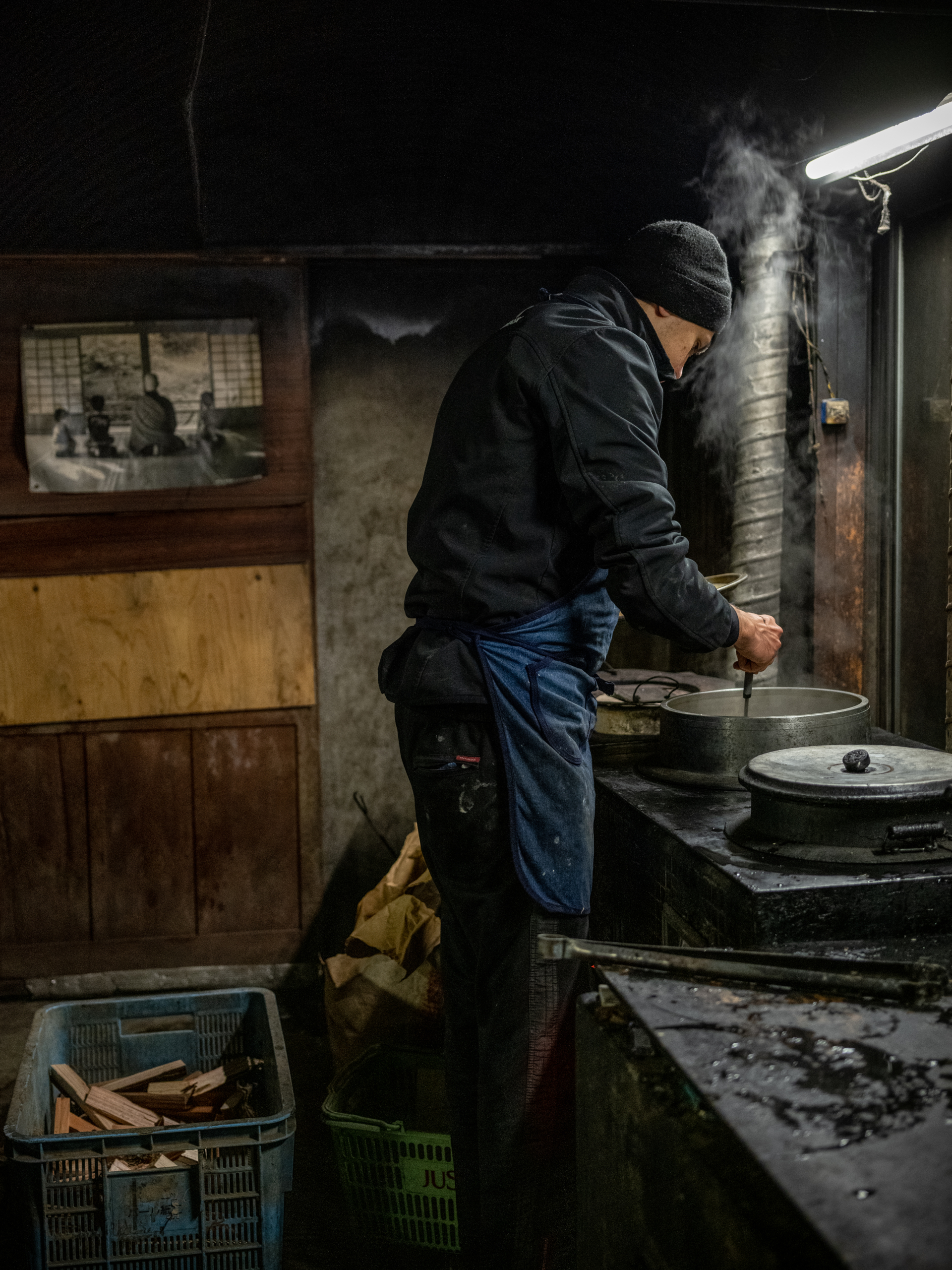 I’ve arrived to Antaiji about one year ago, but it feels that only recently I’ve realized how desperate and hopeless Zen practice is. Last winter we wrote the yearbook for the previous year – I wrote down a bunch of ideas how people tend to mistake scientific search for religious practice, but now the rules I see and the world I live in are definetely changed: obviously, there is no religious practice in the first place.

Now it is obvious for me that the only thing I was doing was rationalizing out the world I’m in and decisions I’ve made to get into this world. And, more than this, so called Joyful Mind that in a way represents the essense of Zen is not a skill to train or attitude to nurture, but the inevitable psychological defence mechanism. As for now, no “religious practice” seems possible to me – the only thing happens is rationalization of present moment and present activities. Iterrative and inevitable.

All notions of Zen practice have their own places as well. If we talk about identifying with a present moment – usually it’s about flow-state which is pleasant for any person, regardless his religiousity and attitude towards reality. If we talk about boddhisatva determination and attitude – that’s (aside from obvious fact that it’s a way to manipulate people by saying how imperfect they are) a universal feature of every human being: everyone believes that he’s doing a good thing for humanity or, at least, people around. Even Karl Panzram – guy who killed sevelar dozens of people just because he was unhappy about this world expressed in one of his writing the hope that if someone would read and accept what Panzram felt and did it could help him to strengthen own’s determination to live and act. As for emptiness and leaving the game – they are inevitably would be accepted and rationalized by monks in conditions when having no property and being celibate are being forced to them by the shape society want them to have. Seemingly there is no way out of this permanent rationalisation process – even being aware of it doesn’t really help, because awareness quite often is just a safety measure to remember in future in the case of failing to get anything out of the investition being made.

It’s true for me. It’s true for any other living person. It’s true for Shakyamuni or Dōgen. In my case the final outcome was believing that everything happened before happened for the sake of my arrival to Antaiji and practicing Zen (I had this kind of idea for almost a year, but now this fanaticism have gone). In case of Shakyamuni it was explaining out his fail in ascetic practice by sticking to the common-sense idea of optimal stress level. In case of Dōgen it ended up in finding teacher only when there was no more chance to search anymore. That’s all the same trick of narrative producing mind.

Why does it happen this way? Probably, people who were bad in believing in the fact that they’re nice and in control were bad in survival as well. Even psychological defences and self-deception have some benefit.

The good example of this kind of attitude is Victor Frankl’s philosophy. Although, he survived a hell and experienced stuff I couldn’t even imagine, the only meaningful and core content in his philosophical system was his decision not to kill himself however bad the life in concentation camp would be. If we remove this notion out of “the meaning therapy” nothing would stay – since it’s not the central point, but the only point: everything else is nothing, but the system of ideas to keep this decision reasonable. And it’s not that different with the case of staying in Antaiji: objectively it’s not a bad or a good place to stay, but to maintain staying it’s necessary to live around the idea that it is a good place to be – moreover, that it is the best place to stay. And nothing is different for any other place, social condition or even age.

Antiutopian novels transmit this idea quite directly. In “1984” it’s “doublethink” – an attitude that helps to rationalize any decision of the state whether it’s coherent or not with its previous politics. In “Brave New World” its a general way to think by any social layer that their life is the best life to live: if you’re on top it’s “I have the most power”, if in the middle – “I take the best from both worlds – optimum is the best”, if it’s the lowest strata person – “I’m free from all of these responsibilities – isn’t it good?” For authors of this novels it felt very bad and unnatural, but that’s exactly what people (including authors) do to theimselves on daily basis – and probably it is the most hard to accept thing, since accepting it would mean that my world is not good, but being forcefully perceived as good – that all my control stops on maintaining the belief that I’m in control.

Buddhism and Zen pay a lot of attention to what happens in the mind – even this doesn’t seem to help a lot. We perceive our own weaknesses and bad sides, but we say that that’s just a realm of “bonpu” – but we have Buddha-nature (which is also more authentic), so there is nothing to worry about. If we would try to find more conclusive “religion” we would have to say there is nothing, except for “bonpu”, but that doesn’t feel warm and consoling enough to do some adepts – it’s not viable.

Even the idea of transmission from heart to heart and not-believing one’s mind seems to be created only for the sake of maintaining natural for any monk, layperson or even saint doublethink process by disposing annoying rationality. And from any perspective one’s activity feels very special in comparison to other ones. Just like Dōgen prefers game of bodhisattva over the ordinary one, any person believes (at least – feels) that he’s doing something very different in comparison to any other person. In apogee it could even lead to the feeling that one lives this moment completely and nothing matters anymore – although usually it stops somewhere on being happy about one’s identity or personality. We could even say that Buddha is fully realized ” bonpu” – dichotomy is artificial.

The main problem in mentioned approach is lack of any statement about what to do. But since it’s not prescriptive, but descriptive this statement is not needed. Although, living it out could be quite uncomfortable, since it creates (or maintains?) tension that could not be resolved: I lie to myself and I know that I lie to myself and I even may know how I lie to myself – but isn’t any of this ideas a lie in the first place? Especially, considering the fact that coherence of perception on any scale is being created an maintained with almost no conscious control.

The main question I have towards this is how is it possible to accept cognitive dissonance process in cognitive dissonance process? By forcefully forgetting? It’s relatively easy to leave the ordinary game out of some religious experience (it happened with me and with many other people before, during or after religious practice), but what one can do in case any kind of game is discredited as self-maintaining in the first place? Is it possible to find an answer or at least consolation in Buddhism or in process of letting go itself, if it’s discredited as an ultimate bonpu-nature manifestation in the first place? Dōgen Zenji had never found (at least had never published, as far as I know) an answer to the question how having Buddha-nature already perfectly realized and practice are compatible. Seemingly forgetting the question was the only way to answer it – but in this case was there any meaning to ask it in the first place? If not, why would anyone spread or even practice religion of letting go?

As for now, I feel that I wouldn’t stay in Antaiji for a long time – it almost feels like my Dharma-life is over – and it doesn’t seem that any way out of that could be provided by Zen or anything else. Obviously, being a monk provides self-gratification, some money and relatively stable state of being – these rationalisations makes me feel even more desperate. Especially, since there was never any value in just staying here for me in the first place and anything else – from social responsibilities to fear to be unhappy about inability to stay the whole three years term, not to mention superstitious tendencies and thoughts – I try to discard as irrelevant to the life.

In case of any outcome – having this text here could be a some kind of material to learn from other’s actions and mistakes for others or agood reminder of a bifurcation point for me. Even if the only reminder’s directive is “Forget it!”